History of paper, from the invention in ancient China to modern industrial paper production last century.

The origins of the East.

He ran the ‘year 105 A.D. when Chinese Ts’ai Lu discovers a new material suitable for burning, a material easy to use but also cheaper to produce: the paper. 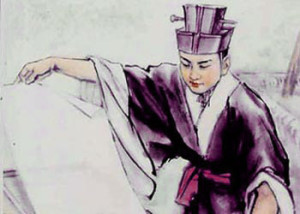 Ts’ai Lu obtains the paper, by the Chinese called “Tche”, by a process that involves the use of old rags, bark d ‘tree and even fishing nets into disuse.

Due to the simplicity of production that basically was based on the maceration of waste materials, the ‘invention of Ts’ai Lu spreads rapidly throughout the Chinese Empire, encouraging the spread of writing from the court of the Emperor to the social classes of lesser rank they certainly could not benefit from the more expensive previous holders or silk and papyrus.

The new invention crosses the borders of the Chinese Empire and comes first in Korea and then Japan, where in the sixth century AD is introduced in phases raffia mulberry, a fiber widespread in the Empire of the Rising Sun, fiber allowing increased production and improved quality of the finished product.
The production of the paper assumes an importance in imported ‘Japanese economy, the Kyoto Imperial Paper Mill stands as production center of absolute importance.

The difficult debut in the West.

In about 1100 the paper appeared on the market spreading from Western Arab kingdoms, but it is still a poor quality product unable to deal with the expensive parchment. Even in 1221 an edict of Frederick II prohibits the use of paper for the compilation of government records.

The huge advantage of the card seems to be its high cost, allowing Venetian and Genoese merchants to carve a large slice of a market that still was evolving. But in 1268 that takes a big step forward in Fabriano in the Marche region is developed a new production system that consisted of multiple hammers operated by a camshaft driven by hydropower.

The product obtained had an exceptional quality for its time, with production costs even lower. Fabriano and the western part of Lake Garda become the main points of reference in Europe for producing paper, ensuring a monopoly on paper production to ‘Italy for the entire second half of the fourteenth. Germany and France will implement the production of paper at “low cost” only later.

Incessant development of the “Dutch machines” to wowe paper.

We are in the seventeenth century, the rags are still the raw material from which we get the card in the Netherlands is beginning to refine the fibers using a cylinder equipped with blades that rotate all ‘inside of tanks, refine and fray the fibers. They are the “Dutch machines”, with this system the paper obtained is white and homogenous.

The constant evolution of scientific-technical and the appearance of new inventions temporarily move from one country to ‘other industrial leadership in the field of paper production. The introduction of the “Dutch machines”, which took place in 1750, was soon overtaken by the British technique called “wove paper”, invented by John Baskerville, a technique that was used to obtain a product free of the signs of the laid pattern.

The “wove paper” guarantees to ‘England half a century of monopoly until the primacy cross channel and goes to France: we are in 1798, Louis-Nicolas Robert patented a “machine à papier à long” literally “a paper making machine long “. The patented device is purchased from the French Didot Saint-Léger, later perfected by his brother Gamble which in turn patented in England the result of his research.

It is from this background that one can speak of the industrial production of paper, the invention of the steam engine of the nineteenth century, the emergence of increasingly sophisticated mechanical systems help fuel the growth of the paper industry, until the appearance of a new problem; the availability of raw materials. Rags still provided the primary component of the dough from which it drew the card.

L ‘introduction of the wood pulp.

We move to Germany in the years 1844-46 and Heinrich Friedrich Gottlob Keller Voelter start producing paper starting from wood pulp, leaving the rags. Thanks to this important step and to ‘continuous development of new and more effective printing techniques, costs are further down, the card is now a commodity of mass and all this allows the gradual literacy of the European population.

We are sorry not currently active promotions at o...
Discover our offers...
We use cookies to Printing House Vittoria continuously improve your experience on our site. By continuing to browse you consent to such cookies.Okread more